This letter was emailed in 2014 to Sandy Marks, former Chair of Islington Social Services Committee and Mayor, via the Head of Services and Consultancy of  Disability Action in Islington  who had agreed to forward it to her as she was Chair of the charity. The content is self-explanatory and asks her to discuss with me her perspective on the Islington child abuse scandal.  In the absence of confirmation, it is possible she did not receive it. Following the Islington Gazette article, 11th May 2017,  I thought it would be of wider interest.  See Islington Survivors Network website for further context.

Our paths once crossed at the Rising Free Bookshop a long time ago, but it is also a long time since I exposed the Islington child abuse scandal in 1992. I have, ever since, lived and breathed the ongoing issues which that raised. Even recently, various survivors have come forward to me and I have continued to learn about the vast extent of harm that they experienced. There has never been a survivors group in Islington for the victims of the abuse and so I still remain a contact point for those who come forward. I have been trying to assist some of them in locating their files but sadly it seems most files went missing at the time of the exposé in the early 90s.

Recently, various documents have come to light through the social media and FOIs which I have not seen before. One of those was the Case review sub-committee report dated 24.7.95 following the Ian White Report. I think you may have chaired this committee – but I could be wrong.

I am interested to know what the thinking was that led to decision 4.1 which stated that there was no evidence to support the allegations of organised abuse. Of course, so much has become widely known since that time but I would really like to understand what led the members to reach that decision. I know the White report did mention that the police found no evidence of connections between perpetrators. Yet, at this time I was going all across the country with the police investigating crimes against children that related in some way to Islington children. Of course, professionals in all agencies at a local level had been pointing out that a network of child sex abusers was active in the Borough but this had been denied by the ACPC committee which is, I accept, where your information may have been coming from. Margaret Hodge always claimed she was misled by her managers and I have no way of knowing what went on at that level.

However, some social media researchers are now collating past press cuttings and I now know that, whilst I was disbelieved at the time in raising concerns about child sexual abuse within the children’s homes, it is now clear to me that there had been a number of issues raised in the years well before I worked in Islington. In fact the serious crimes were very well known about and a number of cases went to court and led to convictions. In 1992, some people must have been surely laughing at my ignorance but we didn’t have the internet in those days and I had to work within my limited field of view and mainly respond to the interminable pain and terror of the child victims and their families. I was also forbidden from speaking with social workers in the other 23 offices which limited my ability to find out past histories of abuse. Lyn Cusack (ADSS) of course told me to stop interviewing children……. I would very much like to interview her, if that was possible, to help me make sense of her decisions. If you still have any means of being in contact with her perhaps you could ask her on my behalf if she would be willing to speak with me.

I am writing a book but it is proving difficult as I am struggling to understand why my professional work was so despised at the time leaving me in great difficulty in trying to protect the children. Would you be interested to meet up to talk about it? It would be helpful for me to have your point of view all these years later when the scale of abuse clearly has now become evident and we have all had chance to reflect on the turbulence of those years.

Rising Free Bookshop was a distributer of alternative books and pamphlets based in Kings Cross.  It was listed in the 1975 book Alternative England and Wales as follows:

I had very minimal communication with Sandy Marks when I was an Islington social worker, mainly because social workers were not allowed to contact councillors directly on work issues. After I exposed child abuse within the children’s homes, and community, and had left the authority I prepared evidence for the Inquiries.  Here is part of a letter sent to Sandy Marks by my professional association’s lawyer dated 13.8.93 which attached a submission of my evidence.  I have asked Islington if they have a copy of my dossier but they cannot find it.

The attached submission to the letter stated that, ‘during the period from the end of 1989 to the beginning of 1992 a great deal of suffering was experienced by an alarmingly large number of children and young people within a small geographical area. The purpose of these submissions is to illustrate that a good deal of suffering might have been avoided if managers within the Social Services Department of the London Borough of Islington had reacted differently to the information with which they were confronted’. It went on to state, ‘the repeated insistence on treating cases only on an individual basis rather than looking at the obvious indicators of close interlinking and networking between both the suspected abused and their suspected abusers, was in our submission unsatisfactory given the repeated reports which showed that not only did most of the children and young people involved know each other but the suspected abusers knew each other too…’   and ‘ there does not seem to have been an occasion on which the responsible management directly and clearly addressed the question of what its responsibilities actually were (and are). 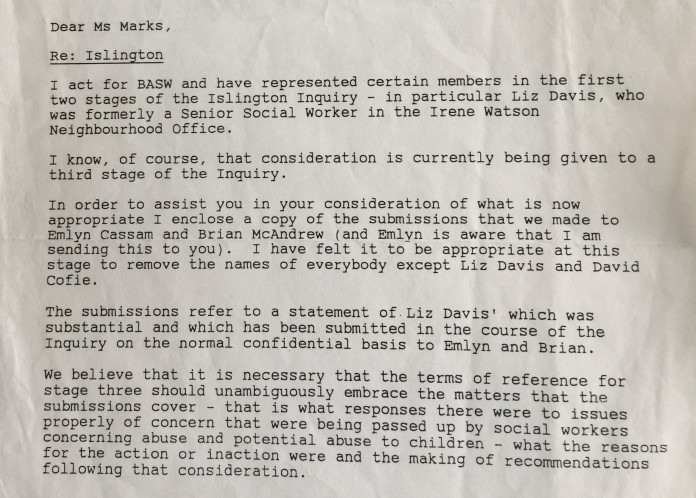 Despite my overwhelming evidence presented in person to the Inquiries,  the final Inquiry report stated  that  ‘Islington Council had investigated allegations of organised abuse and had found no evidence to support this. The Social Services Inspectorate had reviewed the paperwork and came to a similar conclusion’.

Below is a copy of the report summary  (Report into the Management of Child Care Services in Islington Ian White and Kate Hart)  presented to the Case review sub committee held on 24.7.95 with reference to 4.1 as referred to in my letter to Sandy Marks. 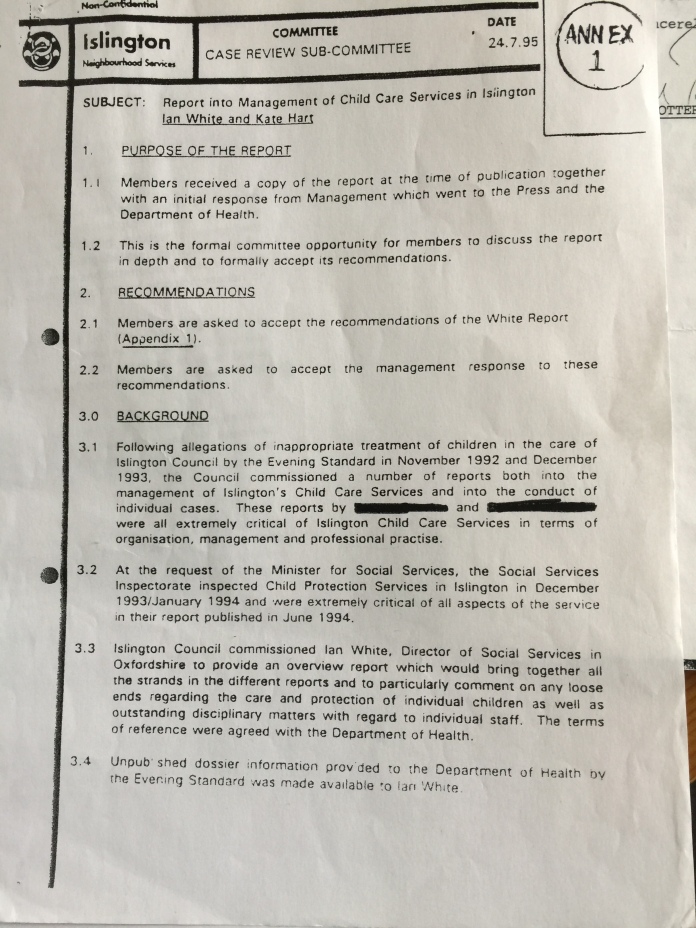 Sandy Marks chaired the London Borough’s Childrens Regional Planning Committee during the early 90s.  In 1990 the committee discussed a report entitled ‘Child sex abuse rings – a proposal for a project group’ and the setting up of a working party to focus on this topic across London. Much work had already been completed by police and social workers across London in the investigation of abuse networks and this was supported by local and national guidance.

By the time of the 14 commissioned Islington Inquiries the term organised abuse was embedded into statutory guidance.  Working Together: A guide to arrangements for inter-agency co-operation for the protection of children from abuse (Home Office, Department of Health, Department of Education and Science, Welsh Office, 1991) stated ;

5.26.1: For the purposes of this Guide organised abuse is a generic term which covers abuse which may involve a number of abusers, a number of abused children and young people and often encompasses different forms of abuse. It involves, to a greater or lesser extent, an element of organisation

5.26.2: A wide range of abusing activity is covered by this term, from small paedophile or pornographic rings, often but not always organised for profit, with most participants knowing one another, to large networks of individual groups or families which may be spread more widely and in which not all participants will be known to each other. Some organised groups may use bizarre or ritualised behaviour, sometimes associated with particular ‘belief’ systems. This can be a powerful mechanism to frighten the abused children into not telling of their experiences. Research suggests some caution in sharp distinctions between types of abuser. Most sexual abusers share characteristics which suggest a calculated recidivist patter of activity, where multiple abuse acts and multiple victims are involved. ‘Paedophiles’ may also abuse children within their own homes and ‘incest’ offenders may abuse children outside the family.

In 2002 the Home Office and Department of Health published  complex child abuse investigation – inter agency issues which was based on learning from the lessons of a number of investigations of organised abuse networks. One of these was the Castle Hill Report (Brannon et al 1993).

In subsequent versions of national guidance including  Working Together to Safeguard Children (DCSF, 2010) the organised abuse of children was similarly defined as,  ‘involving more than one abusers and a number of children. The abusers concerned my be acting in concert to abuse children sometimes acting in isolation, or may be using an institutional framework or position of authority to recruit children for abuse’ (DCSF:6.10). However,  A revised and drastically abridged version published in 2013 and 2015 omitted this definition altogether at a time when  so many child abuse networks were coming to light and professional guidance was so desperately needed.

Long before the Islington Inquiries, in 1988, Islington Social Services had published Child sexual abuse policy and practice guidelines (page 65 of this linked document). These guidelines were innovative at the time and had been written in consultation with academics, campaign groups and practitioners. They addressed the need for police investigation when there was more than one child victim and/or more than one abuser. I question why Islington council suppressed my investigations when they obviously had  appropriate policy in place.

Here is the section of the White Report (1995) which refers to organised abuse. The Islington Neighbourhood Office referred to in this report was where I worked as a social worker.

The well worn Times article below provides the police view in 1993 that wealthy businessmen were under surveillance who were linked to a sex ring abusing young people living in children’s homes in the London Borough of Islington which had been a magnet for ‘child molesters’. In this Times article, Sandy Marks is cited as pledging to sack senior staff if the government proved they had acted unprofessionally. There were some changes made in social services management after the Inquiries.  Very few abusers were also convicted and some are now deceased but I hope that there will soon be a police-led investigation of the information we have from the 90s and also of the information from all the survivors and witnesses who have now come forward to Islington Survivors Network. 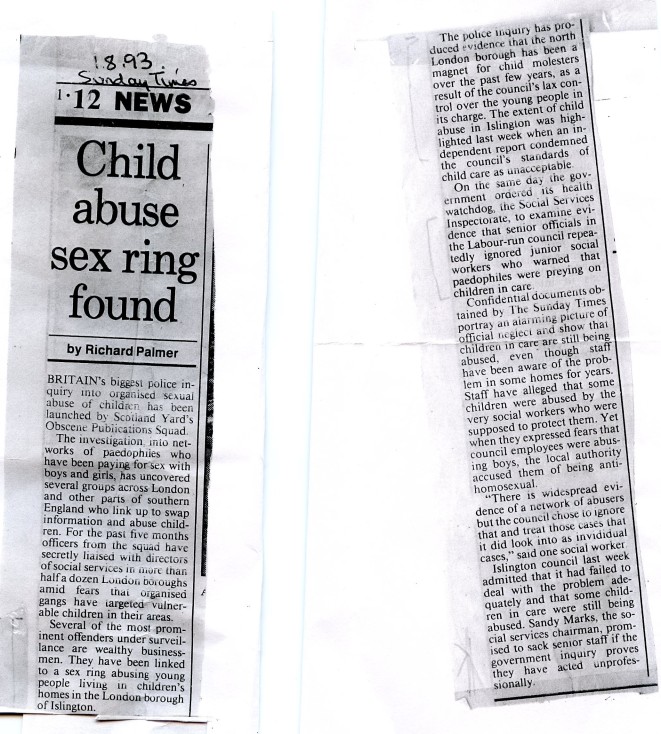